Step inside the mind of one of America’s great virtuosos, thanks to a vast archive of his personal writings, home recordings and artistic collages.

Behind his blistering trumpet solos, revolutionary vocal improvising and exuberant stage persona, how did Louis Armstrong see himself? What was it like to be the first pop virtuoso of the recorded era — the man whose earliest releases set the tune for America’s love affair with modern black music, and who went on to become one of history’s most famous entertainers?

Those questions aren’t rhetorical. There’s actually a deep well of resources on hand to help answer them. For his entire adult life, away from the spotlight, Armstrong amassed a huge trove of personal writings, recordings and artifacts. But until this month, you would have had to travel far into central Queens to find them. Now anyone can access them. Thanks to a $3 million grant from the Fund II Foundation — run by Robert F. Smith, the wealthiest African-American — the Louis Armstrong House Museum has digitized the entire collection he left behind and made it available to the public.

Armstrong wrote hundreds of pages of memoir, commentary and jokes throughout his life, and sent thousands of letters. He made collages and scrapbooks by the score. Over the final two decades of his life, he recorded himself to reel-to-reel tapes constantly, capturing everything from casual conversations to the modern music he was listening to.

One of Armstrong’s trumpets. Credit Nathan Bajar for The New York Times 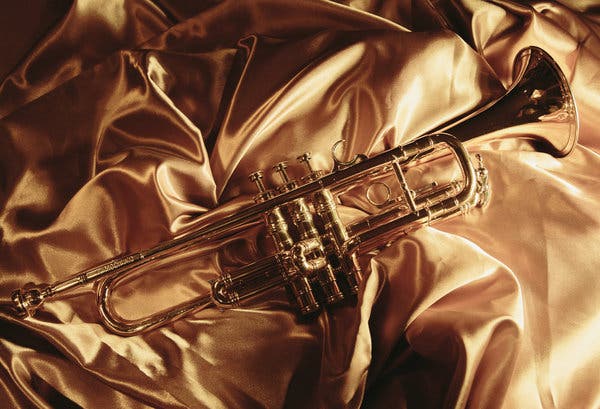 “Posterity drove him to write manuscripts and make tapes and catalog everything,” said Ricky Riccardi, the director of research collections at the Louis Armstrong House Museum and a noted Armstrong scholar. “He was just completely aware of his importance and wanting to be in control of his own story.”

And it wasn’t just posterity. The same things that drove him as a performer — faith in unfettered communication, an irreverent approach to the strictures of language, the desire to wrap all of American culture in his embrace — course through his writings, collages and home recordings. 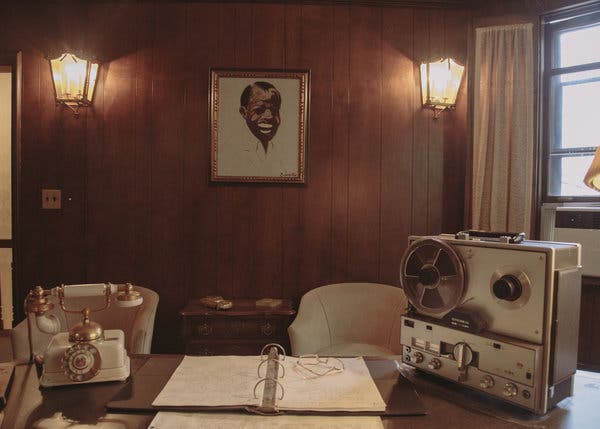 Armstrong’s home office features a portrait of the trumpeter painted by Tony Bennett. CreditNathan Bajar for The New York Times

The Armstrongs in their den. Credit via Louis Armstrong Archive 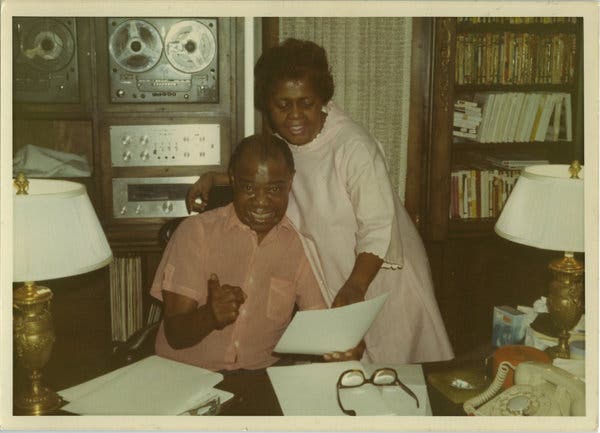 Armstrong had been largely responsible for shaping jazz into the worldly, youth-driven music it became in the 1930s. He emerged as a symbol of racial pride, crossing Tin Pan Alley gentility with street patois, and sometimes singing directly about black frustrations. But as his career went on, his grinning stage persona — an expansion on the minstrel shows and New Orleans cabarets of his youth — fell out of step with most African-American listeners’ tastes. (“I loved the way Louis played trumpet, man, but I hated the way he had to grin in order to get over with some tired white folks,” Miles Davis wrote in his autobiography.)With jazz’s identity solidifying as an art music in the 1950s, Armstrong became especially unfashionable to the critical establishment. The autumnal hits he scored in the mid-1960s, “Hello, Dolly!” and “What a Wonderful World,” seemed only to confirm the media consensus that the times had passed him by.But these archives contain the tools for a better understanding of Armstrong: as idiosyncratic an artist as any, one whose creative instincts only grew deeper and broader over time.
A Christmas card from Richard Nixon became a collaged cover for an Armstrong recording. In the background: the wall of the Armstrongs’ living room. Credit Nathan Bajar for The New York Times 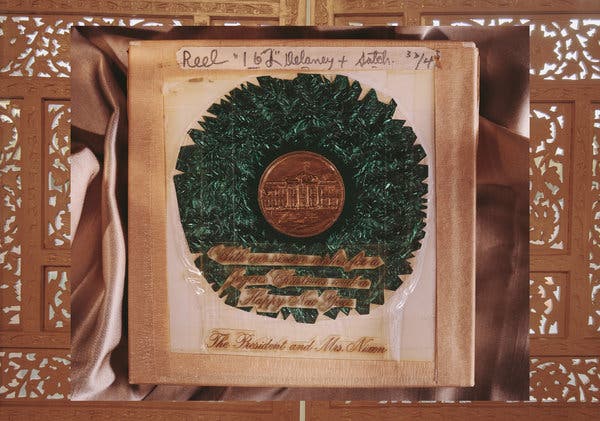 In part, we see a man attuned to race and politics, who took his role seriously as a global ambassador for American culture and kept a close eye on the achievements of fellow African-Americans. When he spoke out against school segregation in Little Rock, Ark., in 1957, he surprised the nation. Some activists said it was too little, too late. The archive, however, shows that he considered it both a proud moment in his career and wholly of a piece with his life up to that point. In the collection is a telegram he wrote to President Dwight Eisenhower on the day Eisenhower announced he would be sending Army troops into Little Rock, urging him “to take those little Negro children personally into Central High School along with your marvelous troops.”

And as solicitous as he was, Armstrong was unwilling to let critical judgments define him. He kept a close eye on reviews, but he wrote acerbically about music critics and sometimes taped his interviews with them — perhaps for evidence, in case they misreported something. On one tape, from 1959, he barks at a journalist after being asked about changes afoot in jazz. “I just live what I play, and I can’t vouch for the other fellow. As long as I feel and hit the notes and I’ve got my own audience, then no critic in the world can tell me how I should play my horn,” he says. 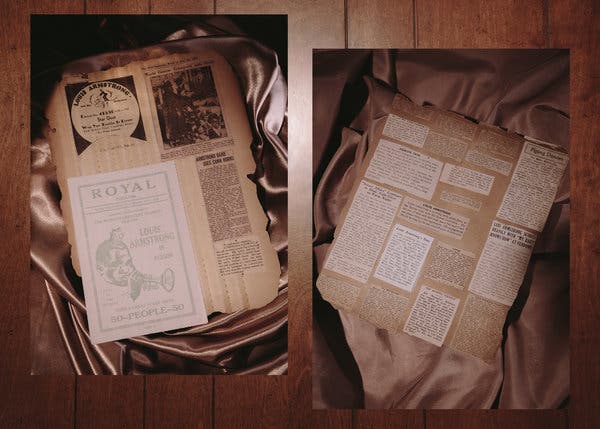 A few of Armstrong’s handmade scrapbooks. In the background: the wall of the musician’s Queens den.Credit Nathan Bajar for The New York Times

Armstrong tells his story about buying coal for a poor black neighborhood when he played the Royal Theater in Baltimore in 1931.

Raised in New Orleans, Armstrong came to fame in his early 20s after joining King Oliver’s Creole Jazz Band in Chicago; his early recordings as a leader, with his Hot Five and Hot Seven, established jazz as a soloist’s music, and made him one of the first pop musicians of the radio era. By the 1940s and ’50s he was regularly included on lists of the most admired Americans.Starting in his 20s, Armstrong frequently clipped newspaper articles about himself and bundled them into scrapbooks. The books began as a tool to convince club owners of his legitimacy, but they turned into a historical record. The dozens of scrapbook binders contained in the archive are a window into his self-image as a celebrity: Armstrong looking at us looking at him.
Armstrong with a teenage trumpeter in a Mexico City dressing room in 1968. In the background: the wallpaper in his hall closet.Credit via Louis Armstrong Archive; Nathan Bajar for The New York Times 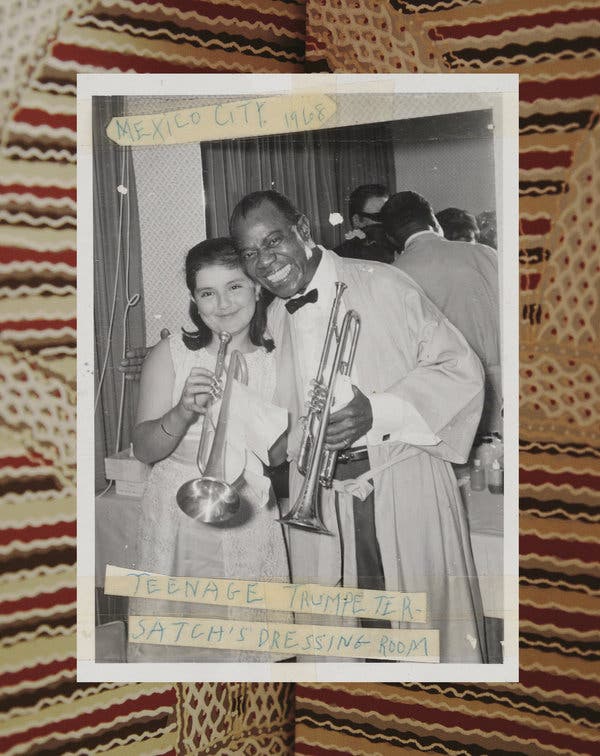 Armstrong began his career as an idol to many African-Americans. Watch the well-circulated video clip of him performing in Copenhagen in 1933 — bountiful and aggressive as he scats over “Dinah,” then carves his way through “Tiger Rag” with a sweltering trumpet solo — and you’ll get why. But as time wore on, many younger people, particularly musicians of the bebop generation, expressed misgivings about his genuflecting stage persona.
Armstrong’s scrapbooks make it clear that he kept a close eye on how he was perceived, as an artist and as a black statesman. When he traveled to Baltimore in the winter of 1931, he donated 300 bags of coal to residents of a needy black neighborhood, and privately saved the news clipping from The Baltimore Afro-American. When his band was arrested in Arkansas simply for traveling in the same bus as its white manager, he saved the article reporting it.
And when a blatantly racist British critic referred to him as “Mr. Ugly” the following year (“He looks, and behaves, like an untrained gorilla,” the article read), Armstrong kept a copy of that too. Reading what arts journalism was like in the late ’20s and ’30s, it becomes obvious how narrow the berth was for a public figure like Armstrong to emerge onto the national stage.
Credit Nathan Bajar for The New York Times 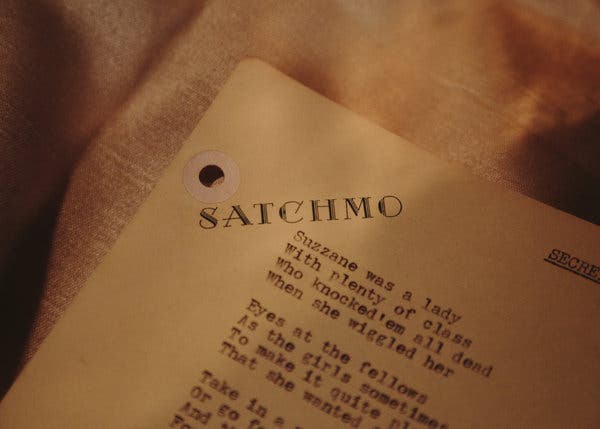 In this essay, which stretches on for 77 pages, Armstrong enshrines a number of other elements of his personal mythology. He reports his birthday as July 4, 1900, an apocryphal but symbolic date he was fond of using. And he describes the importance of the Storyville neighborhood where he was raised, and where much of early jazz was developed.Just months after he wrote this piece, he died in his sleep at age 69. This story would be collected in a posthumous book, “Louis Armstrong, in His Own Words,” that featured essays from across his career, many of which are included in the Armstrong archive in their original, handwritten form.

Making His Own World, With Scissors and Tape 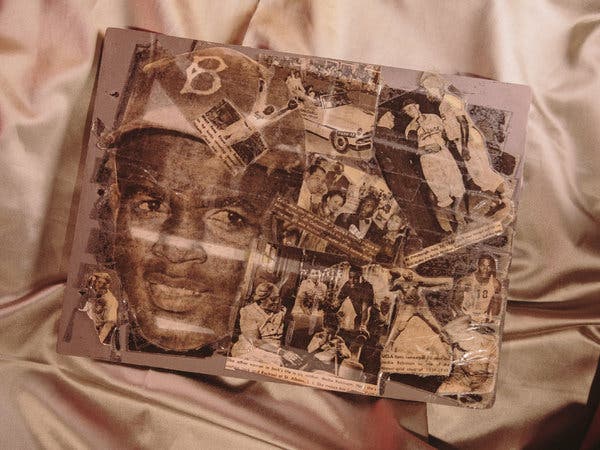